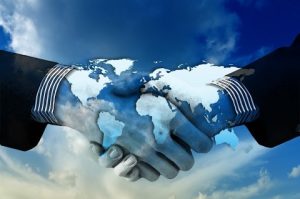 “I have always been an honest trader. I come from a school of traders where there was honour in the deal. No contracts, just a handshake and that’s it, done. That’s the way I prefer to do business but it’s not always possible these days, sadly.” – Lord Alan Sugar

On meeting one of the first things we normally do is shake hands. Whether or not we are conscious of it how we do so offers a distinct first impression of our personality. In essence there are 4 types of handshake with a few sub-variations. Whatever your handshake it should only last as long as it takes to greet each other. Do remember also to always make eye contact when shaking hands. Failure to do so may be taken as a sign that you are being evasive!

The Bonecrusher – I know of at least one case where this actually happened and a petite and very polite woman suffered broken fingers. This handshake is invariably given by those who see themselves as dominant males. It shows little awareness or appreciation of the wellbeing or needs of others. Those who shake hands like this expect attention and even acquiescence. They also tend to prioritise doing business over small talk, and making decisions quickly.

In some cases – notably among political leaders – they will use the double handed grip to demonstrate that they are in charge! They may also favour the palm downwards variation which again is intended to reflect dominance. Both are widely regarded as unfriendly gestures. 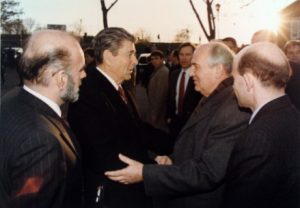 The Pumper – They’ll greet you enthusiastically and shake your hand quite vigorously. Even if meeting for the first time they’re pleased to see you and want to get to know you. You may get business done, but for them it will be part of the process rather than necessarily the core purpose for meeting. Building relationships and making introductions is central to their raison d’être. On meeting them for a second time they may well attempt to hug you in their enthusiasm.

The Long Grip – The grip is firm but they don’t let go as if for fear of upsetting you. They tend to be less confident socially and place great emphasis on taking care of others. Being pressurised to make decisions quickly makes them distinctly uncomfortable as they much prefer to mull things over at length. They also tend to build relationships slowly and place great value on loyalty.

The Wet Fish – There is a general perception that a weak handshake reflects a weak personality, and I would caution against making that assumption. Medical professionals will be well aware of arthritis sufferers for whom shaking hands is very painful, and whose grip is weak as a consequence. Outside of medical conditions the Wet Fish handshake tends to indicate a personality more attuned to projects and details rather than people. They’re not necessarily unfriendly. Rather it’s a case of let’s deal with the information first and make sure everything is in order. Please note that these people do not hug!

The cultural anthropologist Edward T. Hall coined the term proxemics, which refers to the physical spaces between people with which different cultures tend to be comfortable. Those with the Wet Fish handshake become particularly uncomfortable when their space is encroached upon. Standing too close when you have just met them may give them cause to dislike you and hinder any potential business deal. 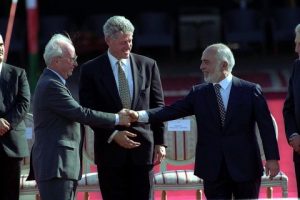 As in the above example those who shake hands at a distance are clearly indicating their discomfort at being in the presence of particular individuals. This particular photo refers to a very specific and tense political situation, but such handshakes are not unknown in business. In such cases it will take a monumental effort to establish any degree of trust, and negotiations are likely to be long drawn out and quite fraught.