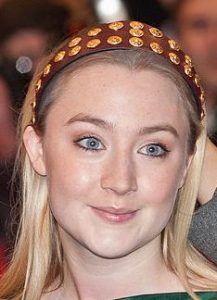 Saoirse Ronan’s face is essentially oval in shape, which we associate with an innate talent for diplomacy, and a definite preference for harmony in both her personal and professional environments. It is natural for her to get along well with others. It should not, however be assumed that she is a pushover, as her features are strong and clear.

Her wide curved forehead shows a combination of analytical and creative abilities. She is an able student who absorbs information to then adapt it to her future needs. The short ‘widow’s peak’ (v-shape) at the centre of her hairline has particular significance for women. A la Marilyn Monroe she has the ability to make an internal switch which draws admirers to her like moths to a flame.

Her upper right cheekbone is prominent, meaning she has high energy levels and is ambitious. It will be important for her to be acknowledged by her peers. Her right jaw is also fuller than the left. This reveals that she possesses an extra degree of determination to succeed – she shares this trait with notable Irish sporting figures Rory McIlroy, Brian O’Driscoll and Roy Keane. When called on to perform demanding physical roles she has the capacity to thrive.

As her lower cheekbones are quite full we can see that she is naturally very empathetic, further emphasising her innate capacity to get on well with others. This will also add extra depth to her understanding of the roles she plays. She will have the capacity to sit quietly and observe, soaking up knowledge and storing it for future use.

Her eyes sparkle, revealing her great vitality, physical mental and emotional. Both eyes tend to be wide open which tells us that honesty is vitally important to her. Any indication of dishonesty towards her will result in people being frozen out. Both upper eyelids reveal a thick fold. This refers both to the importance of emotional intimacy and to the fact that she has a strong ego – certainly needed in her chosen profession! She will, however get her way by charming much more than by being demanding.

Her right eyebrow is curved while the left is almost straight. What this indicates is that even when she is warm and friendly – and genuinely so – she is observing and gathering information. When left untrimmed her left eyebrow also has a small cluster of hairs at the beginning which stand up. This reveals a trait for spotting potential problems at a very early stage of a project. It will not necessarily make her popular but she will usually be right!

Her nose is well proportioned and uniform in width. She will have no difficulty speaking up and expressing herself and will be clear about her values. Her nose tip is not especially large so although she is naturally warm she will not lose her heart easily. Her mouth naturally turns up at the corners revealing her to be an optimist. The lips form a rosebud shape which is indicative of her sensual nature.  There is some puffiness below her lower lip so there is a likelihood of her holding stress in the area of the colon. Any lingering physical discomfort in this region should be seen as an indication she should step back and check her current overall wellbeing.

Her chin is rounded, well-formed and slightly prominent. This is further confirmation of her sociability, values and determination. Creating goodwill will greatly enhance her career.

(This is the latest in a series of celebrity profiles)

Everybody is interesting if we take the time to discover. Matt Damon though has a particularly interesting face with many contrasts. The right side of the individuals face reveals their public persona, and their left side their private persona. With Damon we can see distinct differences between both sides. This reflects that his public and private personas can be quite different, and this allows him to look at life from a variety of perspectives.

His hairline comes almost to a V-shape. In men we associate this with a capacity to solve complex problems quickly. In Damon’s case the V is not absolutely clearly defined. This suggests that his mid-teens were quite a challenging time for him – not that that is unusual – and that his creative abilities felt stymied.

His high forehead indicates he is someone who needs a great deal of mental stimulation to feed his creative juices. Boredom is not an option! His eyebrows are at different heights, which again suggests different public and private perspectives. The right eyebrow sits higher than the left, and if anything his right eye is more open. This indicates he is quite comfortable in the spotlight although, as his gaze is questioning, we see that he is not easily impressed by fame and all that comes with it. Early professional success with Ben Affleck in ‘Good Will Hunting’ may have allowed him to peek behind the curtain and view the wizard for what he is!

His left eye being less open reflects the fact that challenges in his personal life have caused him to develop a strong protective core. This will be extended to family and those close to him. His long eyebrows reflect the importance of family in his life. The left eye angles slightly downwards at the outside corner telling us that he feels a strong bond with those less privileged.

His nose is triangular in shape, with a horizontal line across the bridge. The line shows that he is conscientious and takes his responsibilities seriously. The bridge of his nose dips slightly. He prefers to put a shape on his ideas before conferring with others. Once he has clarified what he wants he can really build up momentum, and as he sees things coming together his energy levels and enthusiasm can skyrocket.

His mouth is slightly wavy and a little higher on the left. The waviness can be associated with variable judgement – he has made some dodgy choices in his film roles – and the slight tilt to the left reflects strongly held private views.

His jaw is noticeably wider on the right. This reflects both the determination and energy he brings to all public activities, but also the need for regular stimulating physical activity. This is something he will neglect at his peril as he would become quite frustrated with himself and this in turn could easily spread into close relationships!

His chin is not especially prominent in the overall context of his face. It is rounded and juts out a little. His ideals are very important to him, and it is natural for him to be supportive of causes. He will do best when he engages his brainpower rather than trying to force his ideas through with physical strength.

The notch behind the tragus (flap of cartilage) of his left ear is quite open, revealing his generosity to those closest to him. The anti-helix (inner rim) of both ears is prominent. This tells us that he will always be a man with definite views of his own, even if they don’t match with mainstream opinion.